Recently in one of our Summer Fellowship meetings at the Columbus Foundation, we discussed how many of us were unaware of the vibrant Columbus community until we were out of school and involved in the working world. I couldn’t agree enough with this statement. Even though I am a Columbus (Dublin) native and grew up going to the Short North with friends on weekends, I still had no idea what this city was like until I graduated from OSU and became involved in the under-workings of our city’s culture.  Since I have started working at the King Arts Complex, I have become acutely aware of how unaware I am of the vast cultural opportunities available here.
I think the first time that I realized this was during my a tour of the building where I work. I saw a picture of Rahsaan Roland Kirk, an American jazz instrumentalist who mastered circular breathing and could solo on multiple wind instruments at once! I remember in high school watching his videos online when I was aspiring to be a jazz bassoonist, and I was amazed and inspired by his unique contribution to the jazz community. I discovered on my first day at the KAC that not only was he a Columbus native, but he performed at the KAC! Creative sparks were flying in my brain after that. I was introduced to the artwork of Aminah Robinson and Elijah Pierce, and now without fail I see their names all over the city! On my way to the North Market last week, I noticed signs about Elijah Pierce posted on High Street. I also just recently participated in the Urban Dare Race, where I was able to visit the statue of Elijah Pierce at Columbus State Community College. Here is a picture of me and my mother next to the statue: 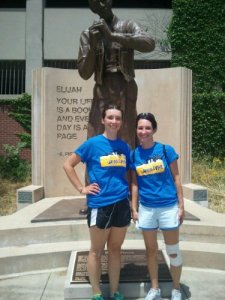 On our way to CSCC, we also passed one of Aminah Robinson’s paintings on E. Broad St:

Now that I recognize her work, I see it everywhere I go! She has work displayed at The Columbus Foundation, The King Arts Complex, and the Columbus Public Library! Those are just the places I have seen, I can’t imagine that exhausts the list.

As the KAC summer camp is preparing for a big dance performance this Wednesday, I have been thinking a lot about the role that my generation and the generation below me has to play in the Columbus art scene. Our city has the potential to be a huge artistic haven, and I think past generations have proven that it is! It is now becoming important to me to not only maintain but expand upon the rich artistic culture that is here in Columbus. I haven’t painted in quite some time, but I am certainly inspired by everything that is going on around me, and I can’t wait to pick up the brushes again!

This entry was posted in Uncategorized. Bookmark the permalink.

3 Responses to Artistic Discoveries in Columbus